I'm No Turkey at Cooking Turkey!

When I first started cooking for myself, I did not know how to cook any kind of meat and because I had an eating disorder the only way I would occassionally fix my meat was to saute chicken in a little bit of olive oil. Now my eating disorder is not in the way and now I am not so afraid of meat and so I am finally learning how to cook all kinds of meats. It's fun! A few weeks ago turkey breasts were on sale, so I bought some, even though I had never before cooked turkey. I didn't know if there were some special way to cook turkey, but I did not feel like taking the time to look through dozens of recipes to try to figure out the "right" way to prepare it, so I went with my gut. I figured that cooking turkey breasts is a lot like cooking chicken breasts, so I decided that I really could not go wrong with sauteing them, but unlike my days with ED, I am no longer afraid to use my spice rack! I used liberal amounts of rosemary, sage, cinnamon, salt, pepper, and garlic to try and give it a holiday feeling, as I always associate turkey in my mind with Thanksgiving. 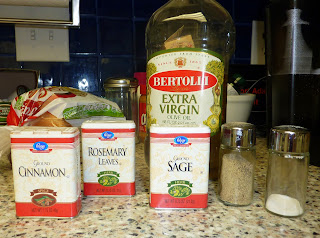 (Disregard the loaf of bread in the background.) 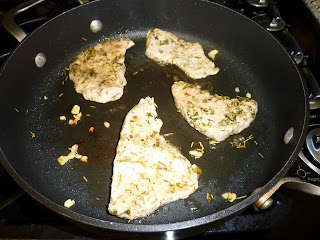 The dish turned out really well, with the cinnamon giving it an extra oomph. Everyone was surprised when I told them that was one of the ingredients! I also roasted carrots and asparagus in the oven in the same olive oil mixture as I used for the turkey and they were fabulous. (The carrots for 40 minutes and the asparagus for 15.) I just love roasted vegetables! 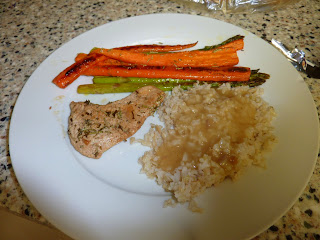