Exactly a week ago, I went to see the Atlanta Symphony Orchestra (ASO) and Chorus play Beethoven's Missa Solemnis. It was wonderful! I love seeing the symphony and sometimes my uncle, who is in the choir, gets me free tickets. I took a friend along and we actually saw a dress rehearsal. I had no idea what to wear-I know to dress up for the symphony, but I also know a dress rehearsal is a far less formal event. Since I don't get the chance to dress up very often, I decided to go slightly formal. 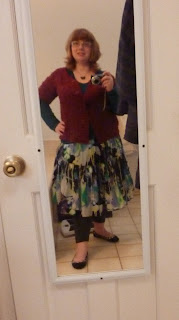 Here's an artistic shot of the High Museum, which is a part of the Woodruff Arts Center, where the ASO and Chorus meets. 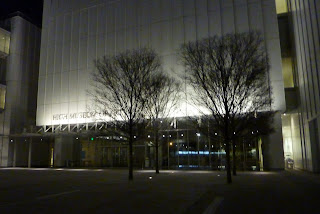 My uncle used to write the program notes for the symphony and so I always take care to read them when I go. I advise anyone to take the time to read the program notes when going to a concert-learning about the composer and the piece playing always helps one appreciate the music. While I was reading about Beethoven, I was struck by how Beethoven also struggled with depression. This makes sense, as he struggled with how to be a composer when becoming deaf. In fact, when portions of this piece were premiered in 1824, "Beethoven stood next to the conductor, Ignaz Umlauf, following the score and beating time, even though he could hear neither the performances nor the audience's tumultuous ovations at their conclusion." It is not that being deaf is bad, but I do think it was incredibly hard, scary, and frustrating to be a musician and a composer and to only be able to hear the music in his head. In fact, Beethoven wrote in 1827:

But how humiliated I have felt if somebody standing beside me heard the sound of a flute in the distance and I heard nothing, or if somebody heard a shepherd sing and again I heard nothing-Such experiences almost made me despair, and I was on the point of putting an end to my life-The only thing that held me back was my art. For indeed it seemed to me impossible to leave this world before I had produced all the works I felt the urge to compose; and thus I have dragged on this miserable existence-a truly miserable existence...

At once, I felt a kinship with Beethoven. I have been almost to the point of despair many times for different reasons and like Beethoven, I also feel that it is impossible for me to leave this world before I have produced all the works I feel the urge to compose. I cannot stress this enough. I have a friend who was told he had only a few months to live-I say "had," because he has beaten the odds and is scheduled for perhaps life-saving surgery soon-and I recently asked myself, "What would I do if I only had a few months to live?" I thought for a while and concluded that although there are exotic places I would love to see, those places would not be my priority, but instead finishing "my art"-namely, my psalms would be. Of course, I am in no way saying that my poetry is on par with any of Beethoven's works, but it is still my art and so it holds intense meaning for me. I first set out to rework the psalms in a way that is more inclusive and feminist, but my project quickly turned into more of a spiritual practice that I plan to continue even when I have reworked the 150 psalms in the Bible. When I rework a psalm, I first say a prayer dedicating my work to Godde and then I read the psalm. After I read it, I ponder the words and the meanings in my heart and I ask myself, "What does this psalm mean to me?" Then I write what flows from the Spirit into my hands. Now my goal with doing the psalms this way is to show people that the psalms are still relevant today-and that poetry itself is still very relevent. Poetry, like music, does away with grammatical conventions and so a person gets to really explore their spirit and The Spirit. I cannot die before I finish my work. I just can't.

Ironically, what I am ending this post with is not a new psalm, but the Gloria in Beethoven's Missa Solemnis. It is charged with life and makes me so glad that Beethoven endured his depression, so that he could give his gift of music to the world.