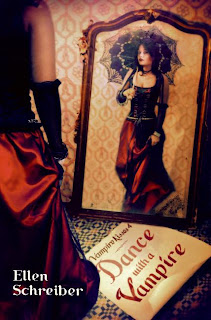 Vampire Kisses 4: Dance with a Vampire by Ellen Schreiber - The effects of reading a book should linger with you long after reading it, but just a month after reading this book I had to read a synopsis to help me remember what the book is about.  That is just pitiful and time wasted.  From what I remember, this book confused me.  Jagger's little brother, Valentine, is in town and Raven once again overreacts to the situation by suspecting that he is up to no good.  I thought Valentine was a mildly cool character, especially with his extra supernatural powers.  I wish Raven and Alexander had paid more attention to what he tells them about their thoughts-he obviously was a smarter character than they are.  I was frustrated by Raven's judgmental attitude towards Valentine-she condemns him for the way he dresses when he dresses in the same goth style that she does.  I had some trouble understanding the plot, but I didn't care enough about the story to take the time to reread a few passages.  Fortunately, I like the book that I am currently reading with my client a lot better. 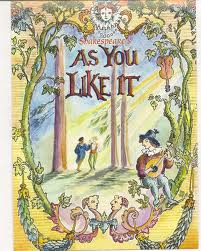 As You Like It by William Shakespeare - I am not a huge Shakespeare fan, even though I have an English degree, but it was the book my classics book group picked out for May.  We decided to read it, because the play is at the Shakespeare Tavern this month and we thought it would be fun to read the play and then go see it.  I decided to keep an open mind while reading it and I'm glad I did, because I actually really enjoyed it.  The play is a lighthearted comedy where people fall in love at first sight, women pretend to be men, and love triangles abound.  It would be a very interesting play to analyse using queer and feminist theory.  I did have to remind myself several times that it is a lighthearted comedy and that the situations in the play are not supposed to be taken seriously, because almost all of the plot points in the book are not realistic.  All of the characters are shallow people who make major life decisions, like getting married, in an instant and seemingly on a whim.  Their actions seem pretty unbelievable, but then again, as one of the women in my book group pointed out, the people during the Renaissance only lived to be about forty, so perhaps they did have to make their major life decisions much faster than we do.  I think Shakespeare meant this play to be a satire though, on how silly the idea of romantic love can seem,especially since romantic love was a very new concept during Shakespeare's time.  It was fun reading this comedy and I can't wait to see the play.  BTW, the play also contains some of Shakespeare's most famous lines, such as this one:

"All the world 's a stage, and all the men and women merely players. They have their exits and their entrances; And one man in his time plays many parts" - (Act II, Scene VII). 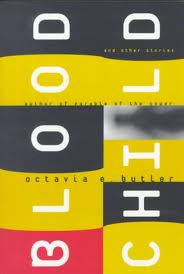 Blood Child and Other Stories by Octavia E. Butler - Of course, this was my favorite book I read in May!  If you're a regular reader of this blog, then you know that I absolutely adore Octavia E. Butler and I am very distraught that there is only one book of hers left to read.  I could not put this book down.  My mom read it after I did and she said the same thing.  We both read the book in a few days time.  The book is a collection of science fiction short stories and they are quality work.  The title story won both the Hugo and the Nebula award and Butler was awarded the MacArthur Fellowship on the basis of this book.  This book is the exact opposite of Shakespeare's As You Like It-the characters are deep, complex, fully-formed persons very carefully making moral decisions that will affect their lives and in about half of the stories, the lives of all of humanity.  Most of the stories contained in this collection are post apocalyptic and yet despite their nightmarish quality, they all end with some kind of hope-they may be frightening, but they are not despairing, which is a quality of Butler that I really admire.  My three favorite stories are The Book of Martha, Speech Sounds, and The Evening and The Morning and The Night-all feature a strong female character and all offer the question of can one person redeem the human race.  I heartily, heartily recommend this book!

Warm fuzzies for all!  Squee!

This time, it's all about self promotion!