[Trigger warning-This post discusses self-harm, specifically cutting, and the stigma of Borderline Personality Disorder.  Please do not read this post if reading it will lead to emotional dysregulation.  But do admire the pictures of Zooey Deschanel-I don't start talking about self-harm until after the pictures.]

I was going to write about my beautiful and tasty curry dinner that I made on my birthday, but then I remembered that today is Mental Health Blogging Day, so once again, you'll have to wait another day...

Instead I am going to gush about my current movie star crush, Zooey Deschanel.  I first "discovered" her in the movie version of Hitchhiker's Guide to the Galaxy, which is one of my obsessions.  Deschanel was absolutely fabulous as Trillian.  I now watch anything that she has touched and I just adore her fabulous quirkiness.  I have a humongous crush on her! 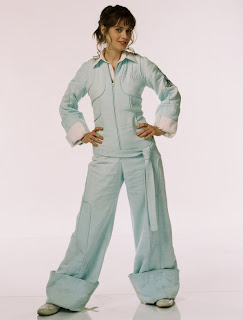 (That's her as Trillian.  I want that outfit SO badly!  Doesn't it look comfy?)
She has a new series out right now called, New Girl, which of course, I watch every week. 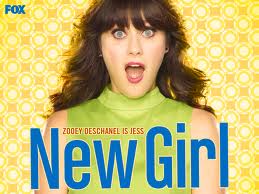 I really like the show.  It's bizarre, funny, and Deschanel's character, Jess, is absolutely adorable.
Because I really like the show, I want it to succeed and I want it to rise above cheap laughs and actually be a quality show, which is why I was disappointed when in one of the recent episodes Jess' comment on mental illness actually made me wince.
The scenario is this: Jess and her friends are interviewing a guy to be their new roommate and Jess is saying wild things to try to discourage him from moving in.  Funny.  The second thing she says is a joke about one of her roommates being almost an alcoholic.  I was borderline on this one.  If the roommate was in recovery and so his alcoholic days were something that he could laugh about, then I would have been happy to laugh at the joke, but I know too well how devastating alcoholism can be to think the joke was funny enough to laugh at.  It was the third line that really made me wince.

I never find jokes about self-mutilation and self-harm funny.  Realistically, the joke was probably put in more for shock value than for laughs, but still, I had a slightly sick feeling in my stomach.  People misunderstand those who cut and think they are just doing it to gain attention.  What they do not understand is that those who self-harm are people suffering from terrible emotional pain.  People cut for many different reasons, but there seem to be two main ones-either the person feels numb and/or empty and they want to feel the pain in order to assure themselves that they are, in fact, alive or they need immediate relief from their anxiety.  When a person cuts, she actually gets an endorphin rush that stops the anxiety much faster than any pill or therapy.  I know this, because I have done it myself.  As an anxiety reliever, cutting is remarkably effective, except for the fact that it causes emotional scarring and trauma, besides the physical scars that one must try to hide.  Cutters cut in order to relieve their emotional pain and while it is extremely effective in the short run, it is never effective in the long run.  Perhaps if the mental illness that it is often typified by self-mutilation, Borderline Personality Disorder, was not already so stigmatized I would not have minded the "joke" quite so much, but as it was, I was not amused.

New Girl is normally such a bizarre and eccentric show-there are a myriad of different statements she could have made about her roommates and herself that would have been way funnier and more fitting to the theme of the show.  By writing jokes that capitalize on marginalized, stigmatized people's pain, the writers took the easy way out.  They did not come up with anything worth laughing at and I was disgusted.  I will still watch the show, but be forewarned, New Girl, you will not get many more chances from me to redeem yourself!