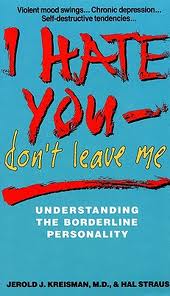 I Hate You-Don’t Leave Me: Understanding the Borderline Personality by Jerome J. Kreisman and Hal Straus – I recently underwent psychological testing and while it did NOT say I have BorderlinePersonality Disorder (BPD), it did say that I have a lot of BPD traits.  And I mean a lot, so I decided to read up on it.  This book is considered the leading reference for helping people understand BPD.  Although full of much useful information, it is very easy to read.  While reading it, I resonated with much that was said about being Borderline, especially this line:

A borderline suffers from a kind of ‘emotional hemophilia’; she lacks the clotting mechanism needed to moderate her spurts of feeling.  Prick the delicate ‘skin’ of a borderline, and she will emotionally bleed to death. (p. 12)

I thoroughly recommend this book to anyone who wants to know more about the diagnosis of BPD either from the viewpoint of the patient, a family member or friend, or a clinician.  And I would give this book five stars except for one very key point: the book is extremely offensive towards homosexuality.  Several times when talking about rates of homosexual or bisexuality among people with Borderline, it lists them as a “sexual perversion.”  The book is also not very friendly towards those who are into the kink lifestyle, as it also lists kink as a sexual perversion.  I did not mind so much the kink stereotype, as it is a typical reaction, but the authors really should know better when it comes to homo- and bi-sexuality.  Sexuality is not a perversion, even if it is not between a man and a woman and I am disappointed that the days of mental health professionals thinking that they are not long past.  Unfortunately, I am forced to overlook the book’s homophobia, as the book really does contain a lot of very useful information. 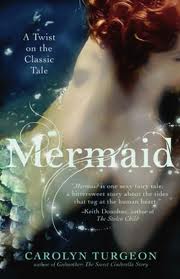 Mermaid by Carolyn Turgeon – This is one of those rare books where after reading it, you still cannot put it down, because you’re so wrapped up in the emotion and wonder of the story.  This is the story of Hans Christian Anderson’s classic story, The Little Mermaid, only adapted and fleshed out for adults.  This is a truly beautiful story and I almost wept when it was over.  The story does differ slightly from the original, but I am not going to ruin the ending by telling you in what way.  Turgeon’s imagery is mesmerizing and I especially love the grisly shipwreck scene in the beginning.  Except for the music, I have always detested the message behind Disney’s version of the story and I had forgotten that the original Anderson version has a more philosophical bent.  In it, the mermaid is fascinated with humans, because she is intrigued by the fact that humans possess immortal souls and that in marriage, the two human souls intertwine and become whole.  She does not win humanity by merely kissing her human lover, but by getting married, because it is then she will gain her soul-otherwise, she loses her humanity and instead becomes sea foam.  What is especially intriguing about this book, is that Turgeon adds an adult twist by incorporating politics into the story, complicating the relationships between the two princesses and the prince.  She adds moral dilemmas, drama, and issues of justice and war.  Both women are characters to look up to, reminding us that life is much more complicated than the oversimplified Disney version.