Phone Banking As Self Care

Christ is the change that occurs in humanity, in art, in philosophy, everywhere.  (90, Monica A. Coleman, Making a Way Out of No Way). You have to be open to Christ for this change to occur.  (Me)

You can substitute "Love" for the word, "Christ", if you prefer.  I believe that whenever you are open to trying new, positive ways of being, then Christ is in your midst.  I thank God for the three Senators that were open to Christ and followed what is right instead of what is expected two days ago.  I thank God especially for Senators Lisa Murkowski and for Susan Collins, as they were under the most pressure.  While I am glad for John McCain, I am disappointed that  people are not praising the accomplishments of these women more.

Monday I was open to Christ when I participated in my first phone bank for Planned Parenthood.  The rest of this post is hobbled together from various writings I posted on Facebook that day about the experience.

I began my day by calling my senators, like I do fairly often now.  5 Calls is an app I recommend that makes calling your legislatures easier.  Like practically everything I do, I posted my experience on Facebook, which prompted a friend to ask:

While I admire the effort, why do you call the Georgia senators?  [...] It feels like a waste of time with such hardcore conservative senators in office.

This was my response:

Activism is one of my forms of self-care.  If I didn't do anything, I would be so depressed.  If there is a way to encourage the few that might listen to do the right thing, then we have to try.  If we fail, at least we can say we tried instead of wondering what if.  By focusing on what I can do, I do not get as depressed thinking about how horrible this current administration is.

I've talked before about how self-care is not just about bubble baths but can also be about being an advocate and an activist.  Although it takes more effort, activism usually feels more satisfying than apathy does. It actually helps, too!  Most of activism is like the ripple effect - one action may not produce an immediate effect but when others see your activism, they may join in.  The more that the common people act, the harder it becomes for those in power to ignore their demands.  One person may be able to make a difference but I believe  that true power comes collectively.

Together we were able to call 2000 people in Nevada in under two hours! (We were calling Nevada because Senator Heller said he would vote no and we wanted to make sure that his vote stayed that way, so we were asking Planned Parenthood supporters if they would call his office and ask him to vote no.).  I was nervous at first but then I reminded myself that I already work at a warmline, so it could not be that much different.  I mostly left a lot of voicemails asking people to call their Senator when they could.  Sadly, Senator Heller did not vote the way he said he would but that is okay.  I know that that may seem defeating but honestly, I am just so glad that the horrifying bill was not passed that I do not care how it happened.  Phone banks do work sometimes but sadly, not all the time.  Fortunately, my experience was pleasant enough that I will definitely participate again if I am available.  Here are some tips that I learned from my first time:

1.  Modify the provided script so that it feels more natural.  The first time I actually talked to someone, I failed miserably.  The script felt too long and so I stumbled and hesitated through it, which prompted the poor woman to say she did not have enough time to listen.  After the call, I promptly removed all of the extraneous material, so that I could get to the point faster.  That way, I was not so concerned about taking up strangers' time and the flow seemed more natural.  I did not have any problems communicating with the people afterwards.

2.  If you reach the wrong person, do not bother reading your script.  The first time I called a number and was told that that person did not live there, I thought it might be a good idea to read the script anyway.  Surely this random stranger was also a Planned Parenthood supporter, right?  Wrong.  The person told me she would be no help because she does not support Planned Parenthood.  Welp!  I should have just apologized and moved on to the next person on the list.

3.  Speak with a smile - be pleasant and polite no matter what!  I tried very hard to always sound pleasant and respectful in my tone.  When I called the woman who turned out not to be a supporter, she actually listened to my whole spiel and then very nicely and respectfully told me that she would not help.  I responded by simply wishing her a nice day before hanging up.  I then marveled to myself that I had just inconvenienced a perfect stranger and yet the whole experience was still pleasant.  If only more people could tell each other they disagree without shouting and disrespecting each other, then this world would be a much better place.

4.  Don't stop and think about each call, just keep going.  The point of phone banking is to make as many calls as possible, so don't stop to debate anyone.  If someone disagrees with you or is busy, stay pleasant, and just keep it moving.

At the end of the phone banking, we participated in a video call where we could share our experiences.  One woman held up her one-year-old baby for all of us to see as she explained that she had had her daughter on her lap the whole time because she wanted her daughter to also become an activist.  Seeing the little baby, I thought of how there is no way of knowing the consequences of what we do in the moment.  Even though we had not reached Senator Heller, by passing on the tradition of activism to this woman's daughter, there may be a great change that we will never know about.  In fact, I am realizing more and more that there is no way to ever know the full extent of how my actions may affect another, which is why I believe it is important to strive for loving kindness and bringing truth to power always.

My favorite interaction between me and another caller was when I called a man named Gary who interrupted me and told me that he agreed with everything I was saying and in fact, was on the other line trying to reach that particular senator already.  I laughed and congratulated him.  I told him to keep up the good work and that I appreciated what he was doing.  Even though phone banking for Planned Parenthood did not achieve its goal of convincing Senator Heller to not change his vote, it did much to counter my skepticism of men: to my surprise, most of my callers identified as male.

In this society, we are constantly surrounded by negativity, and the negativity constantly in the news lately has been proven to affect people with mental health challenges more intensely.  A number of close friends have been struggling more so than usual and I cannot help but think that it is at least partly due to our culture's current diet of negative news.  To counteract the negativity and the resulting apathy, we must look for ways to uplift ourselves.  Activism can do that, for it lets the oppressed person know that they are not alone in their fight for justice.  Once a people know they matter and are not alone, then their power will become greater than they ever could have imagined, for they will be following the will of Love.

Healthcare Is A Universal Right 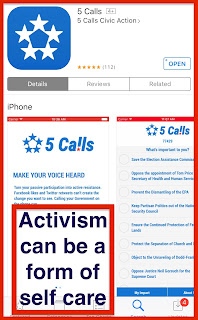 Link Love:
Justice Official Quits Over White House Conduct 'I Would Not Tolerate Seeing In A Company'
The Courage of Susan Collins
What McCain Did Was Hard. What Collins and Murkowski Did Was Much Harder.
Sibongile Mlambo Will Star As A Black Mermaid In Upcoming Freeform Drama, 'Siren'