Yesterday when I got home from work, I immediately started cooking and I totally exhausted myself. I did not have a good feeling about the recipe I was using-the proportions seemed wrong and I was right. There was way too much vinegar in the recipe and I threw away the leftovers-I did not even offer any to my mom! Afterwards I felt physically and emotionally drained and I still had a church meeting to attend. I say "emotionally drained," because I put my heart into my cooking and if a recipe does not turn out right, I have to take some time to mourn the passing of something that could have tasted great. I was so tired after cooking my awful dinner that I had to take a nap and come to the meeting late.

Fortunately, today's dinner was different. First off, I decided that I would take my time making dinner tonight. The recipe was not as involved, but I did not have anywhere to go, so there was no need to rush. More importantly, I learned something yesterday-when one rushes around, there is no time for joy and enjoyment. In the future, I am going to try to honor my limitations more and try not to pick out recipes that are so involved, especially when I still have places to be. Secondly, the recipe turned out fabulously! I made "pizza soup," which I got from allrecipes.com and it is a keeper. It is fast, easy, and it really does taste like you are eating a pizza in soup form. I used turkey pepperoni instead of sausage pepperoni and it tasted great. I also added oregano. 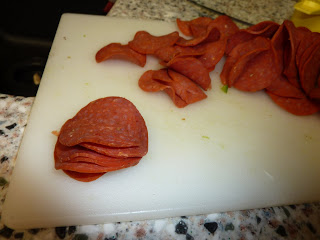 (When cutting the pepperoni, it is faster if you stack them first.) 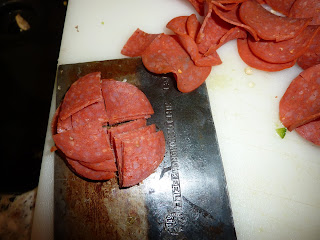 1.Heat oil in a saucepan over medium heat. Stir-fry onions, mushrooms, and green pepper until soft but not brown. 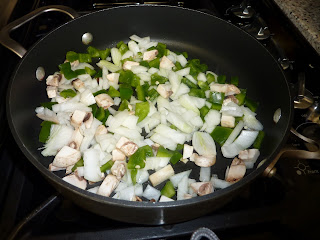 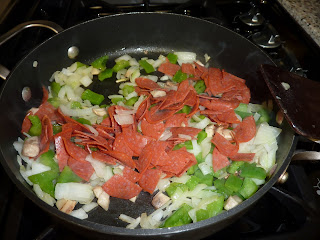 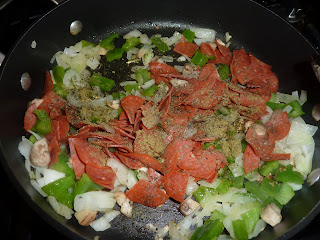 the basil and oregano, and the stewed tomatoes. 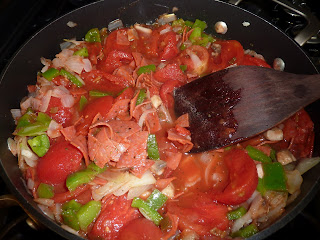 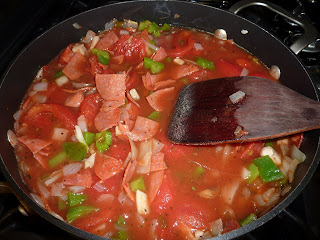 Cook until heated through.
3. Put a big handful of cheese on top and let it melt. 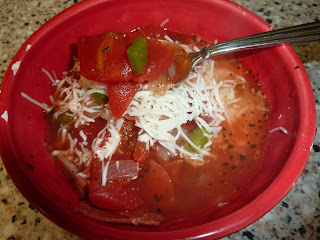 Yum! This really did taste like a pizza and I think it would make a great potluck dish. It would be great paired with crusty bread, which alas, I did not make, but you could! Savor this dish and savor every moment you have in this life. Life is too precious to throw away, like I did with yesterday's dish.