Saturday, I and thousands of other people, will be marching all over the United States, raising our voices to tell Donald Trump that we will not let his administration take away our rights.  Lindy West is an author who is famous for raising her voice and so it is fitting that I review her book, Shrill. 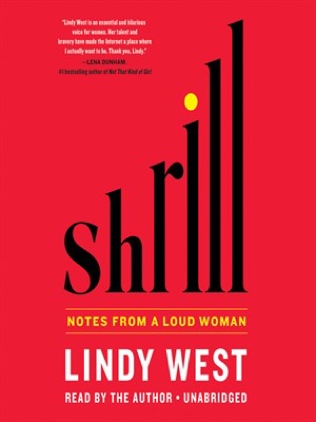 The beginning of Shrill reminds me a little too much of Libba Bray's Beauty Queens - the humor almost seems to downplay the seriousness of her topics - until I read about her stand-up comedy.  Obviously, I did not know enough about her before starting the book!  As the book goes on, however, her issues become more and more serious and her writing reflects this.  The passage that resonated the most with me was this:

When you raise every woman to believe that we are insignificant, that we are broken, that we are sick, that the only cure is starvation and restraint and smallness; when you pit women against one another, keep us shackled by shame and hunger, obsesssing over our flaws rather than our power and potential; when you leverage all of that to sap our money and our time - that moves the rudder of the world.  It steers humanity toward conservatism and walls and the narrows interests of men, and it keeps us adrift in waters where women's safety and humanity are second to men's pleasure and convenience. (19)

Our society uses its beauty myth and its rape culture to make women want to be small.  It brainwashes us into believing we should take up as little space as possible and it is wonderful to read about a woman who is refusing to do that.

West has appeared on television to talk about rape culture and has written many feminist articles and for that has paid a heavy price: countless dehumanizations by the tweets of trolls.  It absolutely floors me how many people seem to think that the internet exists in a vacuum and how many hours they spend on hateful speech.  Words hurt, no matter if they are spoken out loud or if they are typed.  The fact that these words are made public makes it even worse.  When hateful, hurtful words are directed by the thousands in response to feminist statements they are beyond personal attacks but are an attack on womanhood, itself.  The people writing these tweets and emails are miserable people, but it would be much better if they would work on themselves, instead.

What I don't understand is why more feminist internet publications do not moderate their spaces.  They claim they don't want to lose readers, but personally, I seldom read blogs that aren't moderated.  I think that feminists should create their own spaces and should not worry about keeping the readership of misogynistic assholes.  Feminist spaces should be safe spaces as much as they can be in order to promote female empowerment.  Feminism should be about building women up instead of
maintaining the status quo or being complicit in holding them down.  For this reason, I do not read
Jezebel or other mainstream feminist sites that do not moderate - by not respecting women enough to
keep the space safe for them, I do not think that they are truly feminist.

Of course, at least the moderator will be seeing the harmful comments and I do not really know what the answer to that is. It seems like there could be some kind of computer algorithm that could automatically delete hateful words, but I suppose not.

Actually, I do know what the answer is - for people who are threatened by others to look inward and for more people to read Lindy West's book, Shrill, so they can know that no matter how many people threaten or demean another, a person can still create positive change and be an empowering voice for others.  In this new era of conservatism, do not let Trump's administration or his supporters shackle or starve you - risk being called shrill and raise your voice this Saturday and every day.