Take a good look at me, God, my God, I want to look life in the eye, so no enemy can get the best of me or laugh when I fall on my face.  (The Message Bible)

Last week I showed my wellness group the TED Talk by Amy Morin and we were all incredibly touched.  Her story is basically that just when life seemed perfect, tragedy struck, and over a few years her mother, then her husband, and then her new husband's father died.  One of the main ways she dealt with her grief was to create a list of things mentally strong people don't do and look at it and study it every day.  She figured she needed build up her mental strength to get her through as much as she could.  She then wrote the book, 13 Things Mentally Strong People Don't Do, and became a best-selling author.  As she talks in the video, even though she may be "mentally strong," you can still see her grief and it is touching.  The realness of her emotion transforms her rather trite collection of "don't's" into something inspiring.  After the talk, I looked up what her thirteen don't's are and was a little taken aback by how simplistic they seemed to me.  All of the items in her list might be true, but I feel the need to call out just how hard some of them can be to master.  I made a powerpoint presentation for my group and we are discussing each principle on her list.  I thought you all might be interested in it too.  Each principle is followed by a writing from a short article she wrote and then some of my own thoughts.  I just feel like they need some balancing.  I'll also say that I'm surprised she focused on the things mentally strong people "don't" do-don't we all know by now that focusing on what you should not is like a negative self-fulfilling prophecy?  You attract what you send out, which is why I am still surprised that she didn't name it the 13 Things Mentally Strong People Do.  This would have kept the article on the positive and surely, if she knows what people don't do, then she must be able to surmise what they actually do.  All that is to say, here is our lists combined.  Let me know what you think-is the list still too trite or do my added words make the message more palatable? 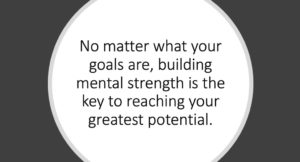 Mentally strong people have healthy habits. They manage their emotions, thoughts, and behaviors in ways that set them up for success in life.
1. They Don’t Waste Time Feeling Sorry for Themselves
Mentally strong people don’t sit around feeling sorry about their circumstances or how others have treated them. Instead, they take responsibility for their role in life and understand that life isn’t always easy or fair.
However, they do take the time to acknowledge and validate their difficult feelings.  They know you first have to face your feelings before you can change them.
2. They Don’t Give Away Their Power
They don’t allow others to control them, and they don’t give someone else power over them. They don’t say things like, “My boss makes me feel bad,” because they understand that they are in control over their own emotions and they have a choice in how they respond.
In other words, mentally strong people have firm boundaries.

“No one can make you feel inferior without your consent.”   ~ Eleanor Roosevelt

3. They Don’t Shy Away from Change
Mentally strong people don’t try to avoid change. Instead, they welcome positive change and are willing to be flexible. They understand that change is inevitable and believe in their abilities to adapt.
Change can be hard but since it is inevitable, it is best to embrace it.

4. They Don’t Waste Energy on Things They Can’t Control
You won’t hear a mentally strong person complaining over lost luggage or traffic jams. Instead, they focus on what they can control in their lives. They recognize that sometimes, the only thing they can control is their attitude.
However, they do at least inwardly acknowledge their frustrations.  One cannot change without
awareness.  They do spend time being grateful.
5. They Don’t Worry About Pleasing Everyone
Mentally strong people recognize that they don’t need to please everyone all the time. They’re not afraid to say no or speak up when necessary. They strive to be kind and fair, but can handle other people being upset if they didn’t make them happy.

“You can’t please everyone, so you might as well please yourself.” ~ Ricky Nelson

How are you with saying no or speaking up when needed?  Is it easy or hard? Are you assertive or
aggressive?
6. They Don’t Fear Taking Calculated Risks
They don’t take reckless or foolish risks, but don’t mind taking calculated risks. Mentally strong people spend time weighing the risks and benefits before making a big decision, and they’re fully informed of the potential downsides before they take action.
When was the last time you considered all your options before making a big decision?
7. They Don’t Dwell on the Past
Mentally strong people don’t waste time dwelling on the past and wishing things could be different. They acknowledge their past and can say what they’ve learned from it. However, they don’t constantly relive bad experiences or fantasize about the glory days. Instead, they live for the present and plan for the future.
Trauma can make this very hard to do.  Flashbacks, nightmares, old anxieties may stick around for
awhile, but it is possible to heal and to learn how to live in the moment.  Practice mindfulness and it
will get easier with time.
8. They Don’t Make the Same Mistakes Over and Over

Mentally strong people accept responsibility for their behavior and learn from their past mistakes. As a result, they don’t keep repeating those mistakes over and over. Instead, they move on and make better decisions in the future.
They don’t beat themselves up for their mistakes either.  Everybody makes mistakes.
What are some of the big lessons you’ve learned from your mistakes?
9. They Don’t Resent Other People’s Success
Mentally strong people can appreciate and celebrate other people’s success in life. They don’t grow jealous or feel cheated when others surpass them. Instead, they recognize that success comes with hard work, and they are willing to work hard for their own chance at success.
The kinder you feel towards others, the kinder you can be towards yourself.  With kindness comes
clarity.
10. They Don’t Give Up After the First Failure

Mentally strong people don’t view failure as a reason to give up. Instead, they use failure as an opportunity to grow and improve. They are willing to keep trying until they get it right.
They also know when it is time to give up and try something else.  They listen to their intuition.
11. They Don’t Fear Alone Time

Mentally strong people can tolerate being alone and they don’t fear silence. They aren’t afraid to be alone with their thoughts and they can use downtime to be productive. They enjoy their own company and aren’t dependent on others for companionship and entertainment all the time but instead can be happy alone.
They also don’t isolate.  They balance isolation and community.
12. They Don’t Feel the World Owes Them Anything

Mentally strong people don’t feel entitled to things in life. They weren’t born with a mentality that others would take care of them or that the world must give them something. Instead, they look for opportunities based on their own merits.
However, they also know deep inside that as humans they are entitled to respect and dignity.  They may not always receive it from others, but this knowledge keeps them grounded and gives them the ability to advocate for themselves and others.
13. They Don’t Expect Immediate Results

Whether they are working on improving their health or getting a new business off the ground, mentally strong people don’t expect immediate results. Instead, they apply their skills and time to the best of their ability and understand that real change takes time.
Time seems to move both quickly and slowly at the same time in recovery.  Waiting is one of the
hardest things to do, but they know that good results come in time.
Are you seeing progress already? It’s all about the journey. 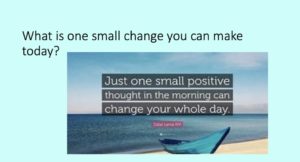 (both graphics are from my powerpoint-I am currently looking for more wellness activity opportunities-if you are interested, contact me at kcjones899@gmail.com.)