I absolutely love a good sandwich! I guess you could call me a sandwich snob. I like my sandwiches to have fancy breads and fresh ingredients, which is why I was very skeptical of Checkers' mushroom cheeseburger. Normally I would not have even thought of eating one, but my boyfriend practically lives on them and so I wanted to see if there was any chance that I would like them too. When I told Charlie that I wanted to try a mushroom burger, he did not understand. "They're unhealthy, Corey! There's a good reason why you don't like to eat fast food. It's not good for you and you actually care about your body." All of those things are true about most fast food and I do care about what I put in my body, but I also know that I cannot live in fear of certain foods. Recovery from an eating disorder has involved me trying lots of different foods that I used to think were "bad" and Checkers burgers were definitely on that list. I don't want to not eat something, because I am afraid of it anymore, so I told Charlie I needed to try the burger that he likes so much. His response? "I don't need to understand it, just accept it." 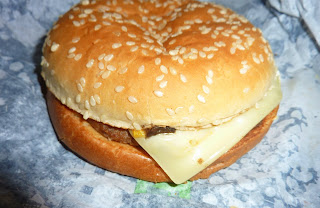 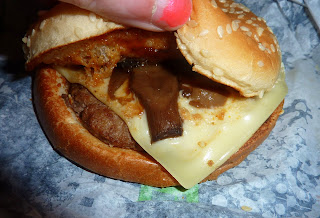 I tried the mushroom swiss cheeseburger and I must say I was not impressed, mainly because I did not like the sauce. I'm sort of weird in that I usually don't like strong sauces, but I am glad I gave the sandwich a try-now I know that I honestly do not like the taste of them and that I am not eating them, because of some irrational food fear.

On the other hand, yesterday for dinner I let my inner sandwich snob take over and I made some wonderfully fancy and fresh sandwiches. I put a mixture of garlic, ricotta, parmesean, feta, and cherry tomatoes that Charlie had made the day before... 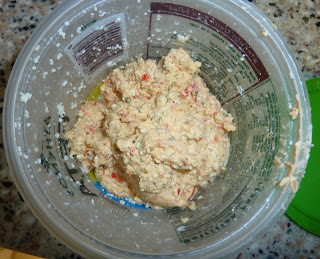 on top of honey wheat bread from the farmer's market. I then cut up a fresh tomato and topped the tomatoes with a fabulous fresh pesto, also from the farmer's market. The last step was to grill the sandwiches on my George Foreman grill. The smell of the herbs and the freshness of the ingredients made my body happy. You have got to agree that my sandwiches are much prettier than the mushroom swiss burger from Checkers! 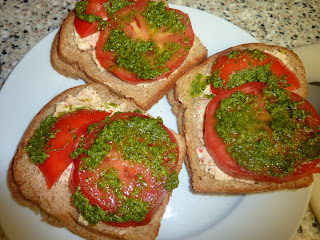 After comparing a fast food burger with a homemade, fresh sandwich I have decided that I will not be ashamed to be a sandwich snob anymore! I like what I like. And maybe part of an eating disorder recovery is not analyzing everything I do and do not eat. Am I finally at the place where I can fully practice intuitive eating? Can I finally trust my body and my cravings? When I ate the mushroom swiss burger, I realized that I was not scared after all. My hands did not shake, nor did I need a cigarette afterwards-all of which have happened when I have been in the throes of ED. At the hospital, the staff stressed eating "normally" and I must admit, making a big deal out of eating a fast food sandwich isn't all that "normal." So maybe now I will try to not make a big deal out of the foods other people eat and will just concentrate on my own. Like Charlie said, "I don't have to understand, just accept."