Who Cares about Kelsey? Event plus links 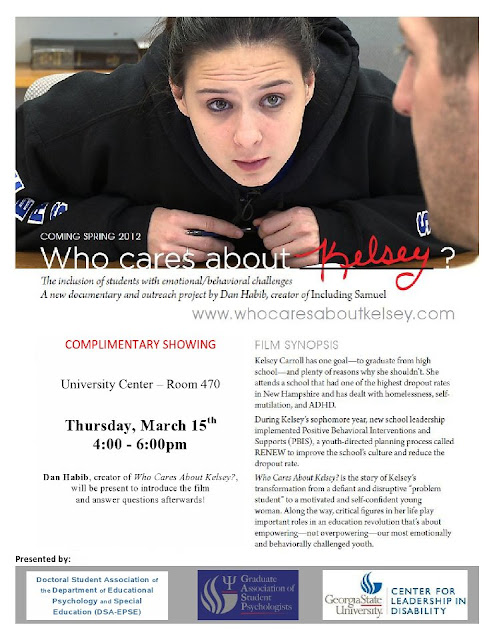 To learn more about the movie and to see a preview, go here.

It looks like an excellent movie and it's about an important topic-how to help teens with emotional and behavioral problems graduate high school.  I won't be able to attend, which is a shame since it's not offered on Netflix yet.  Teens that really could do well in school often do not, because they are labeled as "problem" students and are bullied.  This is a problem that I fear many people do not care about solving-often times it seems to me that those who have power do not want to help those that are a "problem," but want to criminalize and "other" them instead.  But perhaps I am wrong-I certainly would like to be!

And, here are some noteworthy blog posts:

from PsychCentral - My 3-Year-Old Son Wants To Be Cinderella!

The imagination at work in play can create a safe place to act out anger, happiness, fear, powerlessness, loneliness and even self-discipline. They pretend to be mothers, fathers, siblings, Batman, Superman, wizards, apprentices, Peter Pan, Tinkerbell, the Lion King, Beyonce and Cinderella. Typically, gender has nothing to do with it.

It is wise to accept your son’s play for what it is: play. Your approval will contribute to his self-confidence and pride. Indulge him by playing out the characters with him. This is his Cinderella time. He’ll move on to another character soon.

The Beheld-Beauty and What it Means - Barefaced and Beside the Point: Appearance Anxiety in EatingDisorders

To untangle the social angle of eating disorders, we need to look beyond the mere existence of the thin imperative and look at what it says about the role of women: that we are to be perfect, controlled, managed, and compliant—themes that come up repeatedly with eating disorder patients, themes that get to the crux of the matter more directly, without taking the meandering detour through our bodies.

CaptainAwkward.com - #201: Guest post: How can my girlfriend and I prevent body issues from derailing our awesome love story?

If talking about your girlfriend’s weight with her makes you feel horrible about yourself and derails your own self-acceptance, you have every right to tell her so, and to draw a boundary there. Please note: I do not mean that you should tell her she’s responsible for your feelings! First of all, that’s incorrect; secondly, that will likely make her feel worse about herself. What I mean, rather, is that you say something like, “I am so sorry that you are feeling bad about your weight gain, and I think you should talk to someone about that—but I don’t think that person can be me, because I’m working really hard on actively embracing my own body and having those conversations makes it much harder.”

The Fat Nutritionist – Diabetes is Hilarious*

I do not hate freedom, free speech, or America ™. I also don’t have any problem with people using humour to cope with their own lived experience. But when humour is used to further marginalize people, while betraying and promoting loathsome, sophomoric stereotypes…no. I don’t think it’s hilarious.

No parent can afford to be neutral on social justice issues.  An absence of real and meaningful conversations, teaches children to internalize harmful isms as normal and good, because each day kids are bombarded with messages that enforce and support privileged bodies.  It happens in schools, their exposure to media, interactions with friends, churches, sporting teams etc,. Silence means acceptance, and this is why there can never ever be a neutral position when it comes to human rights.

Second Century people were no more likely that Twenty-First Century people to take such a story as literal truth, but nonetheless, to put it in contemporary terms, the story of the raising of Lazarus is perhaps about as useful as Elvis Presley sightings – except for one word that  John’s Jesus says to Martha: I AM the resurrection and the life.  The verb is present tense, not past or future.  The power of Jesus’s message is the certainty of eternal life here and now, not there and then.  […]

BUT, if you only read one, read:
Honor Yourself: Bone Sigh Art-I’m Likin’ This Line

and sometimes when i get lost in that and think 'yeah, we were meant to be'....
it doesn't last long. cause then i think of all the work.
and i think 'shoot, we MADE it work. there was no meant to be about it.'

i think maybe it's both.
there was magic....and we made it work.

and that's got me thinking....

that's prolly the deal about all of life, isn't it?